Jagdalpur, the administrative headquarters of Bastar district is located at 19.07°N 82.03°E on the south bank of the Indravati River. The average elevation of Jagdalpur ir about 552 metres (1811 feet). River Shivna also passes by the city. The major portion of the city is under the dense cover of forest. Jagdalpur is characterized by undulating terrain. This city is dotted with several rivers, hills, waterfalls, forests, caves etc. making it a paradise of tourists. Jagdalpur is one of the main producer of Rice in Chhattisgarh. Climate of Jagdalpur makes it a good place for the cultivation of Cashew. Inhabited by mostly tribal people, Jagdalpur is a rich source of wood and many other forests produce. 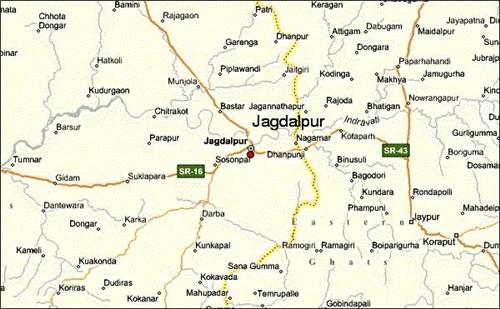 The climate of Jagdalpur can be classified as tropical savanna climate. There are three main seasons in Jagdalpur namely summers, monsoons and winters. March to May are hot experiencing the summers. The average temperature in summers here ranges from 18°C to 38°C. From June to September, Jagdalpur experiences heavy rainfall having a little relief from the hot temperature. The humidity during this period raises and the rainfall it experiences is around 352mm.Winters which lasts from November to February are warm and dry.The temperature during this time ranges from 31°C to 11°C.
The temperature during this time is very pleasant and is considered best time to visit Jagdalpur.

Jagdalpur is located at a distance of 299 kms from Raipur, which is the capital of Chattisgarh. Jagdalpur is part of Bastar Plateau and is characterized by undulating terrain. It has rivers, hills, forests giving it’s a variety of geographical features. The area is rich in water because of the presence of river and good amount of rainfall it receives. The area is mostly covered by thick green forests which are the habitat of many tribal. These forests are the source of many medicinal herbs and wood.

In Jagdalpur one can find different texture of soil varying from sandy clay to loamy sand. The sub-soil found here is largely loamy sand. This is very clearly visible from the type of soil found in gullies and nala beds. In low lying areas the materials is transported through gullies and nalas is deposited and hence a wide variation in soil texture can be found here. Soil in higher altitudes is shallow and thick at lower altitudes. The rapid surface drainage because of the soil located between nala and upland ridges give birth to undulating topography of Jagdalpur.The soil slopes in the area are gentle to very gentle. Soil found here can be classified as non-calcareous, from light to medium textured and slightly to moderately acidic.

Chattisgarh is known as the rice bowl of India and so is Jagdalpur, the main crop of Jagdalpur is paddy. Other than rice cereals like kodo-kutki, maize and millets and pulses like kulthi and tur and oilseeds like Niger and Groundnut are also grown here. The geographic conditions of the area are well suited for the growth of guava, mangoes, cashews etc.The major fruit crop of the region are lime , mango, cashew etc. Also a number of other fruits like ber, sitafal, jackfruit are found in this region.The major vegetables that are grown here include are cabbage, cauliflower, brinjal, while major spices grown here consists of ginger, turmeric, chili, coriander etc.Also as the area is under a dense cover of forests many wild plants are also found here. Some of them are largely used by the tribal people in cooking. Also a number of medicinal herbs are also found in these forests.