Bastar Dussherra celebrated is a grand festival celebrated in Jagdalpur. It has its own uniqueness in the way it is celebrated . The 500 years old festival lasts for 75 days, starting with the dark moon day in the month of Shravan and ending with the thirteenth day of the bright moon in the month of Ashwin.. Bastar Dusherra is famous around the world and many people from around the world come to celebrate it. The grandeur of this festivals is worth watching. This festivals have got its root from the chariot festival of Jagannath puri. The festival is accompanied with a number of local tribes customs. 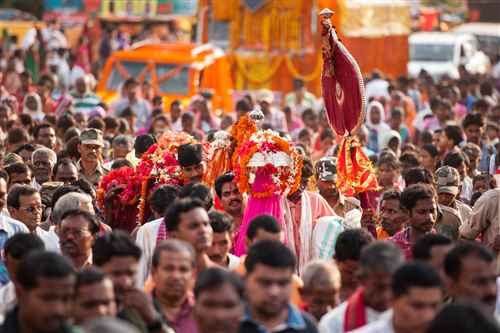 It is said that the Kaktiya ruler King Purushottam Deo in 15th century AD went to the holy shrines of Jagannath Puri temple. During his return he returned as ‘Rath-pati’ with a divine permission to mount on Chariot. From that day this festival is celebrated every year with great zest and enthusiasm. The king of Jagdalpur leaving his all the work worship Danteshwari full-time.

Bastar Dusherra unlike Dusherra celebrated in other parts of our country is not celebrated to celebrate the victory of Lord Rama over Ravana. In short it has nothing to do with Lord Rama. Instead it is celebrated as a congregation of native goddess of tribals of Bastar, Devi Mavli and her sisters.


Preparation for the festival

The preparation for this divine celeberation starts many days before. The making of the two tiered chariot starts on dark night of July on the festival of Haryali Amavasya. For this special carpenters come from Beda Umargaon village. The work of the preparation for the grand festival is carried by a number of people, each one having their pre-specified tasks. Singing of hymns is the work of Mundas from Potanar village. The chariot is constructed by the Saoras every year. The ropes for pulling the chariot, being supplied by Parja tribe. The work is carried out under the supervision of the Dhakada. The pre rituals on the chariot is carried by the Khaki caste.


Different Rituals and Pujas carried out during the festival

Pata Jatra, Worship of the wood

The festival starts on Shravan Amawasya also called Hareli Amawasya, when the first log of the wood that is used to make the chariot is consecrated with sacrificial blood at the Simha Dwar (Lion Gate) of the Palace temple.


Deri Gadhai, Posting of the Pillars

The pillars are posted in the traditional town hall outside the palace on the twelfth day of the bright moon.

A young girl of the Mirgin-Mahara caste is considered to be the medium to seek blessings from caste deity, Kachan devi. She is made to swing on the bed of thorns, she brandishes a sword and gifts it to the king, thus signalling the start of the function.


Kalash Sthapana, Installation Of The Urns

The holy urns are installed in the temples of Maoli, Danteshwari and Kankalin devis in Jagdalpur on the very first day of the navaratri.

This is the very day sacrifices are made for the success of the festival. A youth from Halba tribe is made to sit in a pit in the Sirasar, buried till shoulders. A goat and seven mangur –fish are also sacrificed.

After the sacrificing day a flower decorated 4 wheeled chariot is made to circumambulate the Mavli Temple every evening. It is done for the seven preceding days.

It is the festivals of light when on the eighth day of the bright moon in the month of Ashwin, a processions lit with bright lights is taken to Puja Mandap in the Sunday Square, Itwari.


Jogi Uthai, Raising of the Jogi

The youth of Halba tribe who was made to sit in a pit in the Sirasar on Jogi Bithai is made to raise from the pit. He is highly honored with gifts. This happens on the ninth day in the month of Ashwin.

The festival is preceded by offering the goddess, the new harvest cooked rice. The chariot is then pulled to the Lion Gate of the palace.

With the grace of of Kachan Devi, the festival is successfully concluded.

The same day a conference is held by the tribal chieftains, where matters related to public welfare are discussed with the elected representatives and administrative officers.


Ohadi, Farewell to the Deities

The last day of the festival is marked by giving farewell to the dieties. The dieties from different part of Bastar are brought all dressed up including Mavli, who come from Dantewada and are bid a farewell. The festivals is highly influenced by local tribes culture. The Bhatra tribals who make way for the chariots are armed with bows and arrows. A young girl of the Mirgin-Mahara caste is considered to be the medium to seek blessings from caste deity, Kachan devi. Singing of hymns is the work of Mundas from Potanar village. And hence the grand celebration comes to an end with a lot of festive mood, joy and enthusiasm. This festivals rises above all caste, color and creed discrimination and everyone joins hand to held a grand successful festival.

Explore more about Art and Culture of Jagdalpur