Art and Culture of Jagdalpur

Jagdalpur is a very beautiful city of and a delight of many tourists. It is located on the banks of the river Indravati and is very famous amongst tourists. It is also well known for its festivals, handicrafts like wooden craft, bell metal work, silk cloth etc. Jagdalpur is majorly inhabited by the tribals and hence its culture is very much influenced by the local tribes. It is though the land of multiple religions and languages. Bastar Dussherra is very famous all over for its uniqueness and the gleam. The culture and the language spoken here is to some extent also has a touch of Oriyan culture.

Hinduism, Christianity and Islam are the main religions followed in Jagdalpur. Around 70% of the total population of Bastar comprises tribals. And thus the religious beliefs here are very much influenced by the local myths and religious beliefs of the tribals. The most common tribes of the Bastar region are the Abhuj Maria, Gond, Bhatra, Dhurvaa, Bison Horn Maria, Muria and Halbaa. Bhatras are again sub divided into Pit Bhatra, San Bhatra and Amnit Bhatra, of which Amnit are considered to have Highest Status. 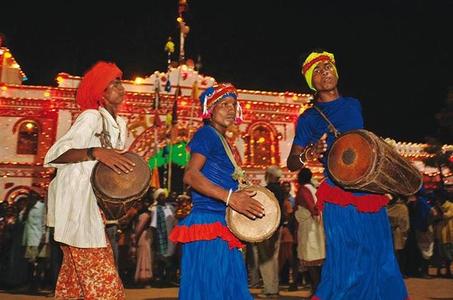 The Gonds, which is one of the most famous tribes in India is known for their unique customs of their weddings known as Ghotul system. Gonds also forms the majority group of the tribals. These people follow their own unique culture, have unique costumes, traditional life style, distinct eating habits and worship their own different forms of God.


Art and Handicrafts in Jagdalpur

Art and craft of any region have always been preserved as documentation of society, time and culture. It has always been an outcome of folk artists, tribal and craft persons thoughts, ideas and imagination. The tribal people have been engaged in the beautiful art and craft work since ages. Their art has always been preserved since ages and is still alive and visible in the lifestyle of the tribal people. These people are majorly involved in collecting useful and household material from forests and giving these materials a unique and outstanding look for everyone to look and get trapped in the beauty of them. These people art and craft can be seen in the mind-boggling shapes, forms and designs they give to wood, clay, stone etc. Here is an interesting elaboration of the art and craft of Jagdalpur. 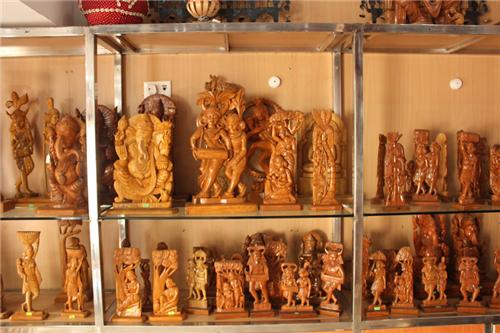 Wrought Iron craft, wood craft and terracotta has been speciality of this region. Wrought Iron craft,
technique inherited from the ancestors has its unique charm. The outstanding skill and creativity of this craft is unmatched. Some of the common themes of these artifacts are the local deities, horses, different bird, armed tribal soldiers and pigs. Similarly decorative items, figures of gods and tribal dieties, wall panels etc. made from teak wood and white wood are of great value. The terracotta art is not only used as decorative item but has a special significance for the tribes. It’s undulating beauty is unmatched. The vibrant colors of terracota seems to be giving life to the unmatchable beauty. Terracota horse and elephant is used by the tribes to offer it to their deities on every occasion be is happy or sad from a birth to death to a wedding. Some of the very famous and most popular terracota items are red and black decorated animal figures of horses, bulls, elephants and idols of different gods and goddess.

The perfect depiction of the story of culture and lifestyle of tribals is the Bell metal toys and decorative pieces. The uniqueness of this art is that they are given a raw look. Bell metal is an alloy of brass, copper and lead. This art has taken its root from Indus valley civilization. The various forms that this metal is given includes the figures of gods, animals, supernatural powers, and birds.

Basketry and other bamboo products is another major craft of this region. The baskets made by these tribes are not only used by them, but across the nation to store different items. This craft is believed to be so old that its origin is not yet known. This is considered to be the craft of Baiga, Gond and Korku tribal communities.

Collected from a kind of worm found in the forests in the area is the silk thread known as Kosa silk Thread. Out of this are made the remarkable Kosa Silk Sarees. The traditional sarees which are largely worn by the tribal women are made of thick unbleached cotton. These are short and narrow sarees of single color. The techonolgy used to weave these sarees is known as Muhajorhi. Natural colors are used to dye these sarees. Daspanika tribe of Nagarnar village is famous for this work.

Some of the places to shop for handicrafts in Jagdalpur include:

There are a number of festivals celebrate with great enthusiasm and zest all around Jagdalpur. Bastar Dusherra celebrated in Jagdalpur is of great importance and has its unquie way of celebration. It differs a lot from as it is celebrated in all other part of our country. It is here celebrated with its unique culture and customs and is a perfect time to witness the richness of tribals customs and traditions. Dussherra here is celebrated and linked with an historic event when the great Kaktiya ruler King Purushottam Deo came back from Jagannath Puri temple as ‘Rath-pati’ after getting a divine permission to mount on Chariot. Since that day the dusshera is celebrated with its uniqueness in Jagdalpur. Thousands of tourists visit Jagdalpur during this period to witness this great event. The celebrations for this starts with the dark moon in the month of Shravan. Lasting for 75 days it ends on the thirteenth day of the bright moon in the month of Ashwin.

Celebrated on on Ashad Shukla Dwitiya (second day in bright fortnight of Ashad month), Goncha Festival is Chariot festival of lord jagannath. It is accompanied with a lot of tribal cultures and the glamour and zest of the people on this day is worth watching. Along with lord jagannath, Lord Balabhadra and Subhadra are also made a part of the Chariot function.

It is also known as Amus Tihar. It is celebrated in the dark night of July. This festival is celebrated to mark the beginning of sowing of seeds, farmers start sowing the seeds on this very day and call this ritual as beej forni. Farmers worship their family god and goddess and seek their blessings for a good agricultural production. One important significance of this festival is that the chariot for famous Dusherra is started to be made on this very special day.

It is celebrated in the month of April–May in shukla paksha, when mangoes are ripened. It is the day when people offer the first mangoes to their god and before this day no one in the family including a child is not allowed to eat mango.


Explore more about Art and Culture of Jagdalpur